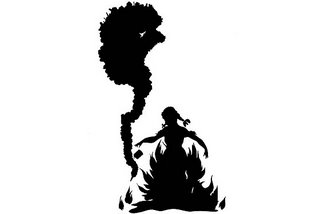 Kara Walker takes on an ambitious combination of themes -- race, history, art, water -- in her exhibit at the Metropolitan Museum of Art (on display until August 6th). She was inspired to create it after the Hurricane Katrina disaster. Interestingly, Walker uses 18th century paper silhouettes with black cut -outs on white backgrounds as her main medium to explore issues of race. She often juxtapositions these black cutouts onto historical works creating thought provoking arrangements. There is so much to this exhibit that it is hard to “get,” but it is disturbing. It haunts you, and it makes you want to talk about it. Perhaps that’s the point. Walker weaves traditional art forms into her exhibit to display examples of how black figures are portrayed in art throughout American history. She includes The Gulf Stream (1899) by Winslow Homer (American, 1836–1910) which portrays a black man in a boat surrounded by sharks. By including this work, what statement is she trying to make about our society? Is the small ship in the background of the painting a symbol of hope or neglect? In another painting, a heterogeneous group in a boat is trying to save a drowning child. A black man is at the forefront of this boat trying to help. He has a commanding presence and a deep look of concern for the child. According to the card describing the painting, this positive portrayal of a black man was very controversial in its day. Most moving for me were two of Walker’s own, smaller works. The first followed the paper silhouette style: two cut-outs of colonial men talking; one appearing to shrug his shoulders. In the background, a cut-out of a black boy lies lifelessly over a box. The title of the work is “Beats Me.” The other work combined paint and paper cut-outs. In it, a God-like figure reached down from heaven to grab the hand of a young black person who was reaching out for help. Their hands did not meet. “Negro Muse Misses His Mark Again” is the title of the work. Some of Walker’s titles are as thought-provoking as the works themselves. Ironically, in 2001, Walker created a piece entitled, “They say water represents the subconscious in dreams.” I could not help, but think, “If water represents our subconscious, what does Hurricane Katrina imply about our national consciousness?”
For more information about the exhibit and to see Walker's images, visit http://www.metmuseum.org/special/se_event.asp?OccurrenceId={E4F51062-8A08-4593-8273-8807B8201F95}}

Posted by ASuburbanPrincess at 1:49 AM