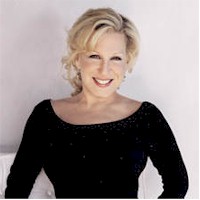 Based on overwhelming reader response, I have decided to name Bette Midler "Suburban Princess of the Month." Readers overwhelmingly felt that Bette Midler's self-confidence, individual style, and positive public service made her a strong role model for women and men alike. Particularly impressive was Bette's work creating the New York Restoration Project, where she used her status to fulfill her dream of a more beautiful New York and to restore and revitalize parks in New York's underpriviledged areas. This is exactly what "Suburban Princesses" are all about - using their talents and resources to promote the public good. One reader also pointed out that Bette was one of the early entertainers to start speaking out about the issue of AIDS, so considering that December first was AIDS Awareness Day, I thought it was appropriate to choose Bette Midler as our very first "Suburban Princess of the Month."

Most readers also felt that Bette's song "From a Distance" was intended to be a positive message encouraging peace and inspiring us to live up to the ideals that a God who "is watching" would want from us.

Congratulations, Bette, for being our first "Suburban Princess of the Month!"

Readers, if you need a worthwhile charity to donate to this holiday season, New York Restoration Project may be one to consider!
Posted by ASuburbanPrincess at 7:21 PM

I admire you and vote for you as the Suburban Princess of 2006! You do so many meaningful things and keep your friends and family involved in the community and their needs.

So, are you soliciting nominations for future suburban princesses of the month? If so, what qualifies a nominee? I assume female and making/made a contribution to the betterment of the world, but identifiably suburban as well? (I think that would make it interesting.) And if so, then *actually* living in a suburb, or just having evident attributes of a suburbanite? (Example: Anna Quindlen. Not sure where she lives, but she oozes suburbanity.) By the way, does Ms. Midler know about her award?