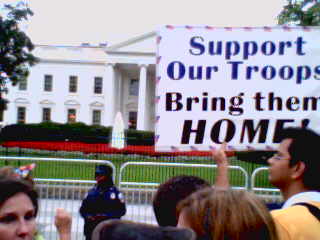 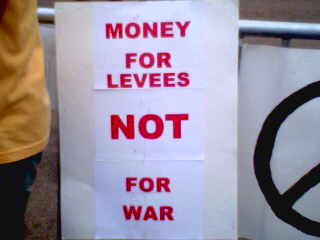 Within minutes of my arriving at the Amtrak station, forty people emblazoned with anti-war signs encircle the station chanting, “Funding for Amtrak, not for War!” They are an eclectic assortment, typical of New York City: professionals in khakis and polo tops, hippy looking types with long beards, women who could be homemakers or executives, middle-aged couples, singles in their 20s. Some look liked they shop at Ann Taylor, some just wear jeans and t-shirts with pithy peace slogans, and a few look like they rummaged through the Salvation Army thrift shop.

It is 8:00am. Many have been waiting for their trains since six and are starting to worry that they won’t make it to DC in time for the anti-war rally. There is a lot of cynicism in the crowd. How ironic that a crane damaged the electrical wires outside Trenton the night before the big anti-war rally. Was that what happened? Everyone is curious, cynical, confused, annoyed. “I’m not normally into conspiracy theories, but…” I hear repeatedly. “At 9:00 am, we’re going to stage our own rally right here,” a murmur through the crowd. I wish I had taken the bus. Unfortunately, I had procrastinated in making my plans and by the time I had decided to make the trek to DC, there was not a bus ticket to be had on Long Island or Manhattan. Sixteen busses left from Long Island, from Manhattan, even more.

Suddenly, a group of middle-aged women carrying black and green signs claiming, “Take back the future,” appear in the most visible spot of the station, underneath the departure board and in front of the escalators. The group has been stuck on the train since 6:00a.m. An Amtrak manager simultaneously appears to tell the crowd, don’t worry we’ll be leaving in half an hour, just be patient. I notice police and a few army men starting to encircle the station. They are preparing for a riot, I think. There are four or five policemen cozying up to the “Take back the future” crowd. One officer in particular is very friendly and seems to have won the trust of the group. An Amtrak representative tells the “Take Back the Future” group that they have a train ready for them but only for their group, nobody else. The friendly police officer says, “Don’t take it. If you take that one, it will take you five hours to get down there. That’s a single-track train. You’ll get there too late.” The group discusses what they should do. They bought their tickets as a block, so they all have to do the same thing. They either get a refund or travel to Washington. By 10:00am, they decide to get the refund because they think they’ll never make it down to Washington in time for the march. They decide to stage a rally of their own on 34th and 7th. Someone has called the New York Times and some reporters and photographers appear to cover the story. “Take Back the Future” marches out of Penn Station chanting, “Take to the Streets! Take to the Streets!” A few minutes after they are out of the station another Amtrak representative arrives and announces that the trains to DC are ready to board. Amtrak will take anyone with a ticket from a train before 9:00am.

A kindly group from a Progressive Democratic Club in New York City adopts me on the train and says that I can travel with their group if I don’t know where to go. When we arrive at Union Station, a young man named James joins us, too, but he quickly abandons us to go off on his own. Our group moves slowly. There are a number of senior citizens who have never taken the DC subway before. I also am eager to get to the march after so much waiting, so I venture ahead on my own.

An African-American man on subway who just returned from Atlantic City sees my sign and asks me about the march. He says he cannot come, but his heart is with us. His opinion on the war: “It’s all about money; it’s always about the money.” I tell him about our train delays. He says, “It makes you wonder doesn’t it?” “Sure does,” I say. Another African-American man on subway car comes up to me and says, “Thank you so much. You are our true patriot.” Then, he says that he is going to pick up his son and join us at the rally.

I exit the subway at Metro Center. I want to get to the Ellipse, but I have no idea where it is. I ask a group of teen-agers also holding signs if they are going to the rally, if they know where the Ellipse is. “We’re protesting against the protesters,” a young boy in his late teens or 20s says. I look down at his sign. It is white and I see a swastika drawn in black marker and other words. Blood rushes to my head, my heart races, and I cannot read the words. I cannot believe that someone would have a sign with a swastika on it, and I start to panic, but instead say calmly, “Oh, we are not on the same side.” His friend says laughing, “You want to join our protest?” And I say, “Oh, no,” and I run across the street, a bit rattled. I see the march starting. “Hey, hey, ho, ho, George Bush has got to go!” I hear it again and again as the crowd comes closer. I jump out in front and join the march, thinking, “They’ll get me to the Ellipse, eventually.” The crowd of teen-agers jumps out in front of the group and me. They seem to want to lead our parade, to seem as if we are together. I tell the people around me to slow down. I tell them about the sign with the swastika and how I do not think we want to be associated with that group. When we slow down, the teenagers slow down. When we try to get in front of them, they run. When we stop, they stop. They seem too practiced and professional for teenagers. I get a real uneasy feeling. Finally, a big man in an AFL-CIO cap tells us to stop the parade and he goes and talks to the police.

I finish the march quickly and I still don’t really know how to get to the Ellipse, so I enter the crowd at another point and follow the path again. This time it is more crowded. I am behind a group called the “Raging Grannies.” They are singing anti-war songs, and I find out that they performed on stage at the rally. One of the raging grannies tells me that Jesse Jackson and Cindy Sheehan gave great speeches. I ask if she has copies of the raging grannies’ songs because I would love to join in the singing. She says that she doesn’t have copies, but they have a website now. If I google “raging grannies,” I can get the lyrics. The grannies stop singing to take their picture together. Other songs take over: “All we are saying is give peace a chance.” Then chants, “This is what democracy looks like.” “Hey, hey, ho, ho, George Bush has got to go!” “Bush lies, thousands die,” “The people united will never be defeated.” “Bring them home now!” “What do we want? Peace! When do we want it? Now!” “Support our troops; bring them home!” “War Ugh. Good God, what is it good for?” Absolutely nothing.”

And then, there are the signs: “Pump with care…soldiers die so we can drive.” “Kentucky Marine Moms Against Wars” “Bully Bush sends working stiffs to war, gives idle rich huge tax cut.” “Who are the real looters? Halliburton.” “The war was based on lies. Bush didn’t care, do you?” “Our troops are in the wrong gulf.” The signs are homemade, either written with marker or poster boards pasted with print outs from the computer. The crowd is friendly, jovial, made up of average folks: college kids, housewives, working stiffs. It is a crowd I might find at a block party or on Jones Beach in summer, but right now, it is everywhere, omnipresent, and I can’t see the beginning or end of it.

It’s 4:00pm and I am standing in front of White House with some women from Wisconsin and Minnesota. They came on one of the 50 busses from those two states. A young man yells out, “Defeat Hurricane George, Category 5 President.” I am standing in front of the White House just watching the crowd. People and people and people keep coming and coming. “Come on people get pissed,” the same guy yells. People keep walking by: a man in a suit, a blind woman with dog, a woman who nods at my sign, which says, “Money for levees, not for War!” Police throng in front of White House. There are rows of police. Then, more police wearing helmets and holding batons.

There are more police on the White House lawn. Under every tree, there are more clusters. A woman with a baby passes in front of me. The site of all the police surprises me. It contrasts the kind, jovial nature of the crowd. I think to myself that the White House really does not have a sense of who is in the crowd, how average and ordinary we all are. I hear a helicopter overhead. I suppose after 9-11, the Administration does not want to take any chances. They want to be prepared for anything. I think of the disaster in New Orleans. Ironic, don’t you think?
Posted by ASuburbanPrincess at 12:55 AM